Remember the nineties classic ‘Boys and Girls’ by Blur? Being a nineties kid, the words of the album Parklife are still carved into my nostalgic brain. *Grabs mic (aka hairbrush*) “girls who are boys, who like boys to be girls, who do boys like they’re girls”. That was a cracker. However, it has to be said, the words of this classic song cannot be more current for what’s going on in the fashion world right now…

French model Casey Leglerm, signed to the men’s division at Ford Models, is now starring in the All Saints Portrait series – in menswear. Ruuska, signed by Paparazzi, is now Finland’s first male-female model. Ruuska says he is happy to be involved in “breaking down gender barriers”. And there’s more where that came from. The world is in awe of the beauty of Andrej Pejic, the male model who featured in the Marc Jacobs womenswear campaign. And who can forget the re-branding of Yves Saint Laurent which brought with it a new face for its menswear – female supermodel Saskia de Brauw. This wasn’t too surprising since new Creative Director, Hedi Slimane is known for his androgynous approach to design, and he once said that his ‘perception of genders ended up slightly out of focus from an early age’.

And it’s not just the models, but the gender bending clothes they’re wearing. Like Slimane, another designer known for his androgynous gender shuffling approach is J.W. Andersen. However, his Autumn Winter 2013 collection has to be the most experimental to date.  Ruffle-hemmed skirts and shorts in white, slate grey and sand were all featured in the womenswear spring/summer 2013 collection. Nevertheless, the menswear collection showcased in January showed that men can adopt a similar look. With kinky leather boots with femininely frilly knees, mini leather pinafores and long-sleeved shirt-dresses with seductive low cut backs and a slim-cut grey shift dress we saw one of the more feminine menswear shows to date.

Compare this with the Dior Spring Summer 2013 collection – full floral skirts, and flowing bright shifts in girly tones such as pretty pinks celebrated femininity. But this was heavily contrasted by the masculine jet black streamlined suit. This androgynous, slick tuxedo was one of the most talked about pieces of the spring collections and shows that for ladies next season, it’s all about the Y chromosome. 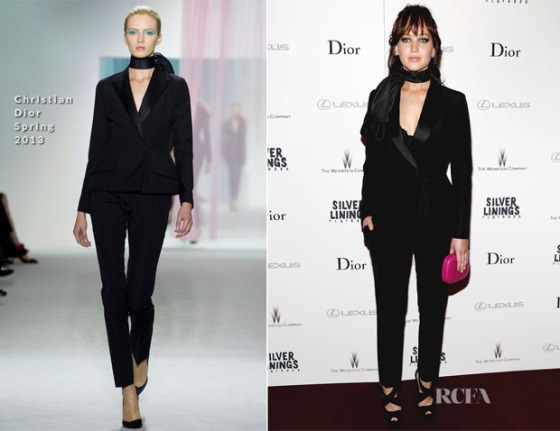 But should we be shocked? Should men embrace the mini skirt as they please? Of course. This fashion gender hopping has been done before, and it was much more shocking the first time round. Trousers date back as far as 6BC – yet they have only been a socially acceptable form of women’s clothing for around fifty years. And men in skirts? Well, Scottish men have been wearing them for millennia.

So gents, grab your frilled knee highs and mini shift dresses, and ladies, it’s time to wear the trousers…