Prints are heading north next season as tartan makes its comeback. The London Lassie explores the historic print’s checkered past, why we have a never ending love affair with the heritage look and what makes it hot for next season.

Everyone in the world knows tartan. Everyone has worn it at least one moment in their lives. Nevertheless, it doesn’t have a flashbulb memory when looked at. Whether it be a Burberry scarf, a school uniform, a pair of punky jeans or with a black tie outfit, it looks at home everywhere. Whether it past, present, or future, this Scottish material has been fascinatingly favoured by people the world over. But, next season it makes a comeback with a twist.

Making its appearance on the recent Autumn/Winter runway shows through the likes of Alexander McQueen, it is clear this timeless print from bonny Scotland is a key trend for next season, whether it be in the traditional sense, or in a unique new way.

Highland inspired designer Corrie Nielsen, who has recently dressed the likes of Florence Welch, showcased a grand, yet wearable compilation using tartan in the traditional way. “I love that I was able to reach back to my own heritage to develop the collection and dedicate it to my Scottish ancestors” said the proud designer. Nielsen used ruby and monochrome tartans mixed with romantic lace, body caressing pencil skirts, torso crossing sashes, and Elizabethan style puffed dresses.

She wasn’t alone in using the Scottish print. However, others showcased tartan like never before. The Clements Ribeiro duo paid homage to the Saltire by utilising electric blue hued tartan mixed with severe clashing prints, giving a daring and edgy look. KTZ also showed that tartan needn’t be dreary. The likes of Westwood and Holland have brought us coloured tartan prints before, but KTZ had a fresh approach by teaming absolutely bright highland prints in shades such as scarlet and acidic lemon mixed with different, yet tonal tartans and unique prints. An interesting and wearable look, although definitely not for the faint hearted.

With a tartan trim here and a plaid pencil skirt there, it’s clear heritage prints are an Autumn/Winter catwalk fixation for numerous designers. For example, last year, tartan was celebrated by Yves Saint-Laurent, Burberry, and Mulberry among others. Attention was also on Rihanna who rocked McQueen’s blood red tartan skater dress. In 2008, D&G showcased tartan hosiery and Agyness Deyn strutted down the catwalk in Henry Holland’s baby blue tartan mini with matching eye-patch. The list simply goes back to the very start of style. This trend seems to be greeted with open arms year after year with designers aiming to bring a new spin. But how did it spark such popularity and why do designers attempt the Highland fling every other fall? 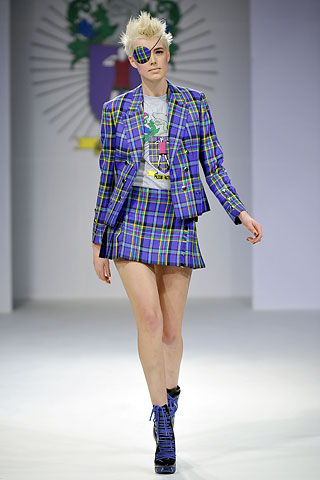 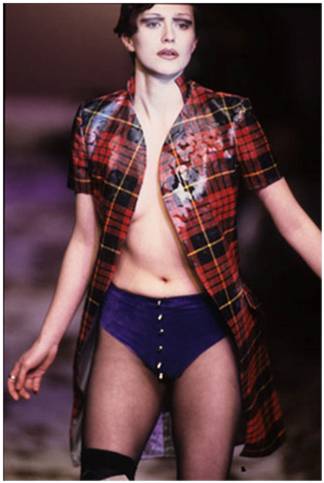 Louise from The Highland Store on London’s Portobello road believes tartan is popular with designers because “the patterns are so various and yet, recognisable”.  Tartan certainly is various, with up to 7,000 prints existing and around 150 new designs being made each year. Dawn Robson-Bell, a designer at prestigious tartan manufacturer, Lochcarron, believes “tartans often end up on catwalk collections because they provide high impact”. And who can forget Alexander McQueen’s outstanding, yet tarnished 1995 collection ‘Highland Rape’?, which caused optimum impact because of its controversial nod to the violent highland clearances.

According to designer Corrie Nielsen, “Scotland has a rich history with dress. It is an ideal place to base a collection”. Delving into the history of the Scottish print, it’s clear to see the opulence and controversy that designers showcase in their collections. In the 1500s tartan was fashion just for the wealthy. However, the Treaty of Union with England in 1707 meant Scotland was no longer independent and tartan became a popular symbol of nationalism. As time weaved its way into the Romantic Movement and into the Victorian era, the print was appearing in more fashion catalogues and popularity sky rocketed.

As for the unruly side of tartan’s history, it certainly has had a checkered past. According to Dawn Robson-Bell at Lochcarron, this controversial past “plays a big part in perpetuating the interest”. In the 18th century patriotic plaid was temporarily banned because of its rebellious associations with the Jacobite army. Centuries later into the seventies it was a symbol of revolt again, when it became the punk’s symbol of discontent with the ruling class. Most recently, Burberry discontinued their tartan cap because of its popularity with delinquents.

It seems tartan’s history and contradictory symbolism adds to its popularity. According to Henrietta Ludgate, the “innovative history works like a wardrobe of ideas that continue to influence us consciously and subconsciously” and “What other print has been outlawed and banned? Tartan bounced back and is now one of the most famous fabrics in the world”. And with so much space for innovation it’s clear tartan will always have a special place in our wardrobes.

To get into the traditional tartan trend mix a Lochcarron scarf with lace, or leather for an urban twist. Alternatively, dive head first into tartan’s new wave by mixing Pucci Style prints with colour coordinated tartan. Or if you’re feeling even more daring, take note from KTZ and mix acid bright tartan pants with a tonal plaid top and extravagant belt.

Tartan is an old fling we’ll never forget. After all, what other print can makes us feel like an aristocrat and a rebel at the same time? All ye lassies and laddies in favour say aye! 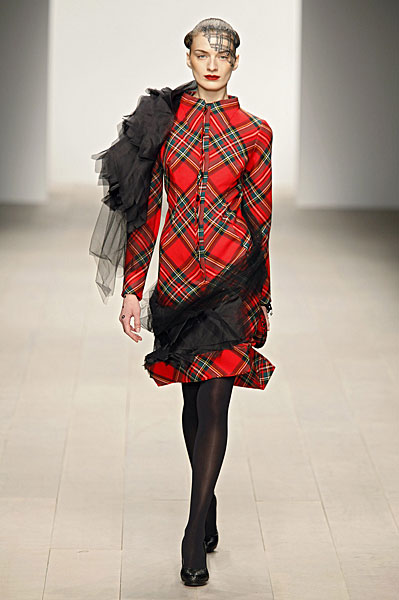 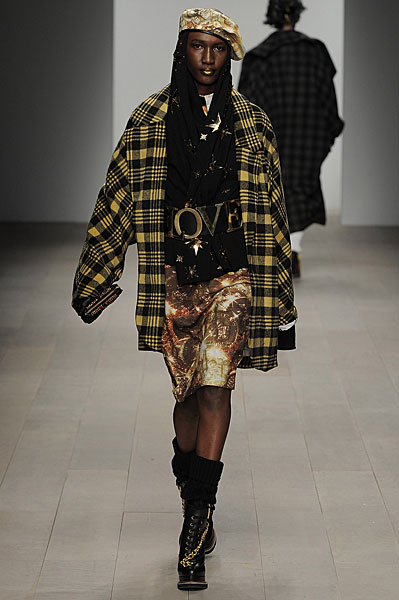 NB: An edited (more historically centred) version of this piece featured in the Winter 2012 issue of Glass Magazine