The London Lassie explains how even though the year is 2013, the vibe is definitely the sixties…

The sixties was a special decade. We landed on the moon, the Beatles wrote songs that would nestle longingly forever in our heads, skirts got dangerously short and classic beauties like Bridget Bardot and Grace Kelly were in their prime. This summer it’s time to celebrate this amazing decade, as spring summer 2013 style brings with it an array of minis, shifts, psychedelic prints, felt tip eyeliner and bouffant locks. The dark gothic themes of winter have melted into an array of bright and bold geometry, lines and prints. Groovy baby!
As Louis Vuitton’s chequered twins glided down escalators last September one thing was clear: psychedelic chic is back with a bang. As Marc Jacobs brought monochrome and primary coloured checks to Vuitton, he brought similarly toned modish lines to his own collection with barcode clad Edie Sedwick style models. At Moschino the vibe was sixties meets Lana Del Rey as models donned with bouffant locks wearing belted and pocketed floral shifts along with matching plastic handbags and white bug eyed glasses graced the runway. 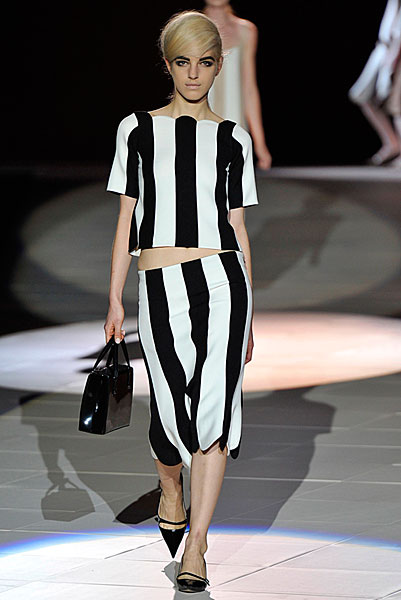 Just like the pop art of Andy Warhol caused a storm over fifty years ago – colour blocking, popping and contrasting is huge for spring-summer’13. Michael Kors utilised black and white as well as bold colours such as scarlet, emerald green, canary yellow and sapphire together with stripes and sixties inspired curves in shift dresses, A-line skirts and crops to create a collection any sixties chick would kill for.

The sixties is too great a decade not to bring back into style now and again, but why now? Quite possibly the release of “Hitchcock”: the biopic based around the making of Alfred Hitchcock’s iconic horror, Psycho. The suspense master’s heroines were always, classy, understated and beautiful (he famously dismissed Marylin Monroe as being “too obvious”). The likes of Miu Miu showed us how to create the heroine look right now with over the knee skirts, demure blazers and faux fur stoles. Grace Kelly and Janet Leigh, eat your heart out!

Get your eyeliners st the ready girls and get the Kinks on the iPod – it’s time to embrace your inner sixties goddess. For skinny minnies, go for the chop and rock the Edie Sedgwick/Twiggy pixie cut with a monochrome mini skirt and crop top a la Vuitton. For buxom blondes, grab your backcombing brushes and make that hair sky high. Finish off by slipping into a Hitchcock style skirt and jacket combo. And for anyone who fancies a sixties vibe on a night out, make your eyes dark, and slide your figure into a bright shift dress from PPQ or Moschino. Nostalgia never looked so good.