The London Lassie celebrates the top shows of the season…

As models strutted around a giant globe to the tune of Daft Punk’s Around the World in the Grand Palais one thing became clear. Unless you’ve been hiding under a rock it’s pretty apparent Karl Lagerfeld has taken over the world. And really he can do no wrong. Season after season he manages to capture the attentions of even the style evaders with his avant-garde and unique designs. The hula bag of this season for example – who woulda thought? 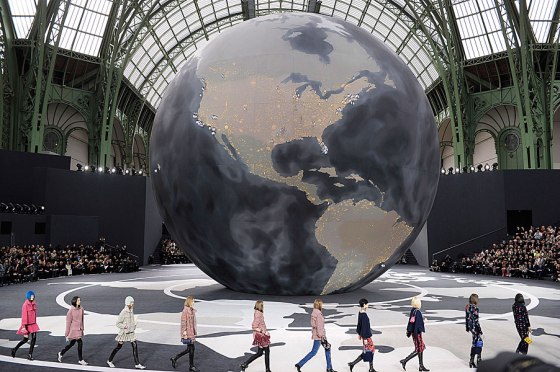 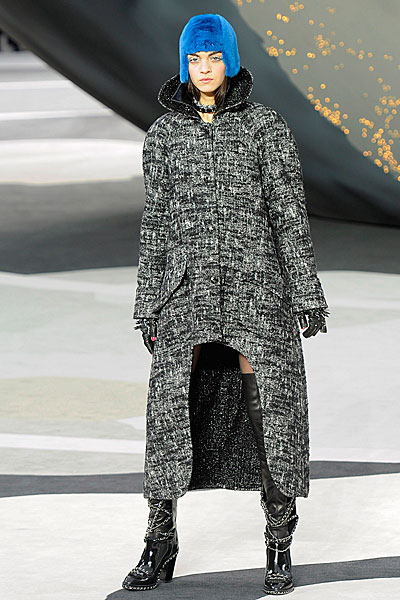 Who would have thought sheer latex could be classy? Who thought a collection heavily utilising safari prints could still look British? Bailey has the innate talent of keeping a legendary label to its traditional routes whilst keeping it oh so now. Burberry’s hero piece, the trench, was revamped by adding sheer latex sleeves and brash gold pockets and belt. Tailored traditional pencil skirts became either sheer showing everything, or were made using shiny reptile skin, leopard print, or daring pvc. Take note: pencil skirts are now edgy.

Burberry is known in recent years for being one of the best brands to embrace social media marketing. And this became clear in the collection as instagram style hearts dotted their way across much of the deliciously caramel, chocolate and honey hued collection. Because of the juxtaposition between past, present and future – Burberry nailed it. 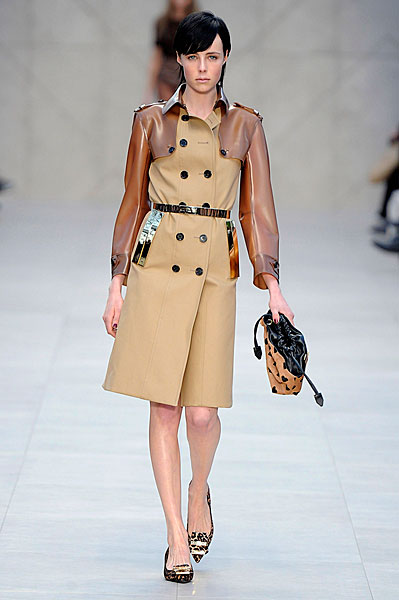 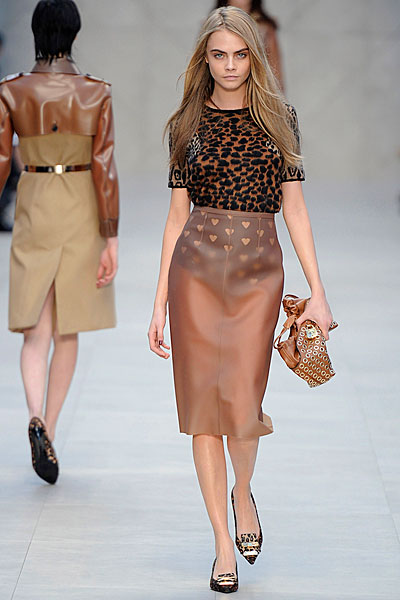 If you believe less is more – look away now.

Following a similar vein from last season, the catwalk glistened with dropped crotch metallic trousers, wrestler style cinched in metallic waists, strong shoulders and draped clothing. The garments in rich shades such as plum, fuchsia and teal, were complemented with chandelier style earrings and slicked back flowing tresses. This Glam Rock array is a collection no-one can wait to get their hands on (unless you’re a wallflower, power hips and power shoulders at once may be too much for some).

Sure, Rousteing keeps giving us his signature stand out metallic and power shoulder styles but hey, if it ain’t broke don’t fix it. 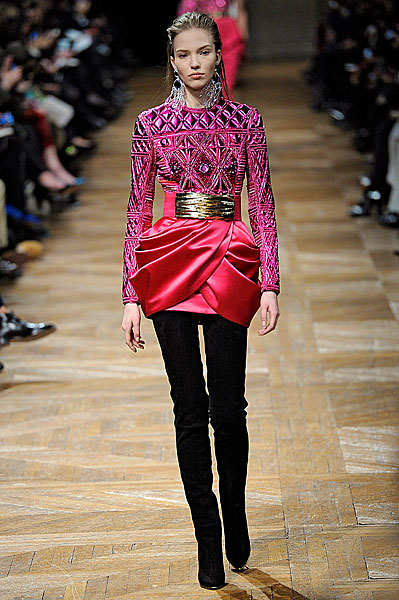 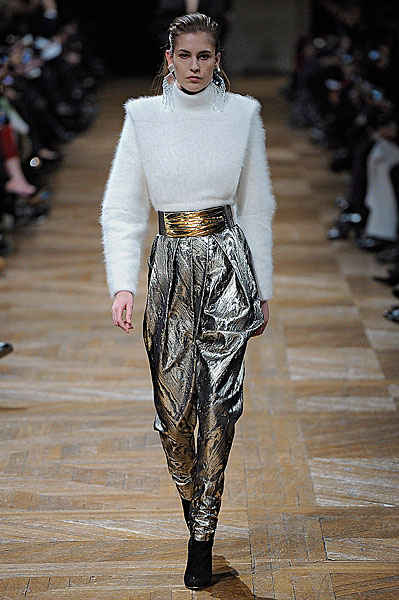 Marc Jacobs’ latest injection into the house of Vuitton rendered a vigorous applause in Paris. Not just because the supermodel, Kate Moss made a runway appearance, but because of the designer’s stunning take on classic 50s ladieswear. Traditional became modern and poised became promiscuous.

Models were topped with Elizabeth Taylor style short black wigs that made even Kate and Cara look unrecognisable. Cute floral blazers were worn with no bottom half showing off ivory limbs. Pastel coloured Pyjama like skirt and trouser suits were rocked with modern attitude. Petticoat like pencil skirts were worn with lace bra tops under oversized masculine overcoats. Silk mini hot pants were worn with over sized traditional cashmere sweaters. And tweed was given a modern makeover by adding fur, feather and sequin encrusted hems. Vintage style fur coats were worn over silk nightdress-like lace trim dresses, like a sexy 50’s glamour puss making a dash from the Savoy at 4am.

Marc Jacobs stated before the show “Some of my friends in the show, who shall remain nameless, have spent a lot of time with me in hotel rooms, all dressed up but not going out. I like the louche implications of all that”. The collection certainly did have a boudoir feel, and looked like the most glamorous walk of shame ever. 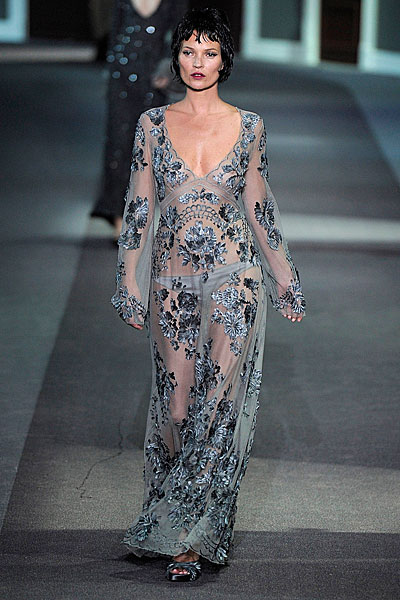 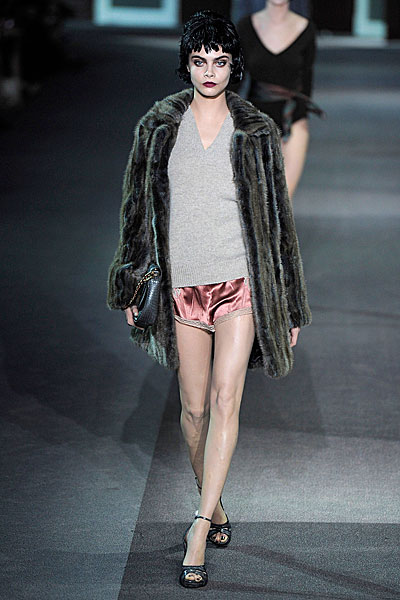 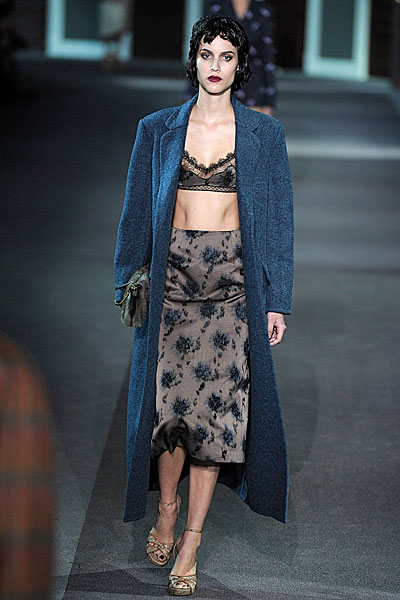 Dolce and Gabbana’s AW13 dose of glamour was a regal affair. Mixing renaissance opulence with British traditionalism and the usual Sicilian sexiness, it’s no doubt this collection comes top of the list.

With dresses encrusted with mosaics of patron saints, opulent crowns, and lavish sunglasses the designer duo’s obsession with religion became clear. The mosaic styles were inspired by the Monreale Cathedral, a Norman structure outside Palermo, gothic and elaborate gold crucifixes were worn around necks and of course, Dolce and Gabbana’s signature black lace was utilised heavily.

The glistening yet gaudy eye opening display was paused a little by showcasing a more sombre palette of grey, black and white in the form of tweed three piece figure hugging suits with Elizabethan style corset peplums.

And just when the aroused audience had calmed down, the blood red finale took to the stage. This is probably a moment that will go down in history as one of the most magical moments in the temple of Dolce and Gabbana. Pure regal, pure splendour. Bravo. 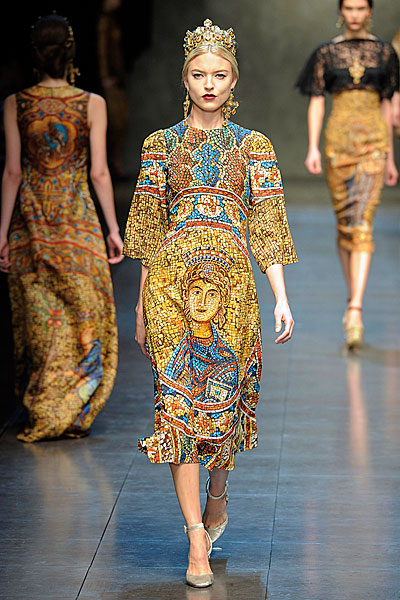 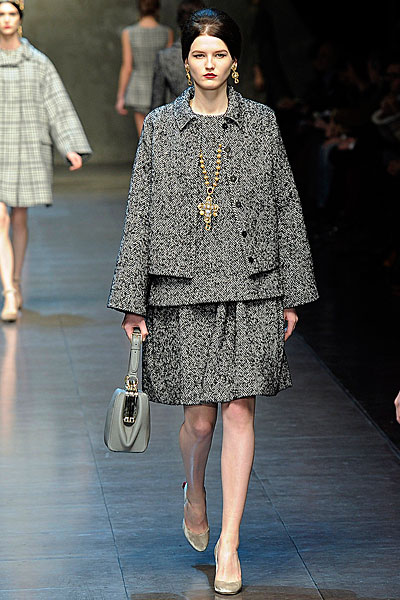 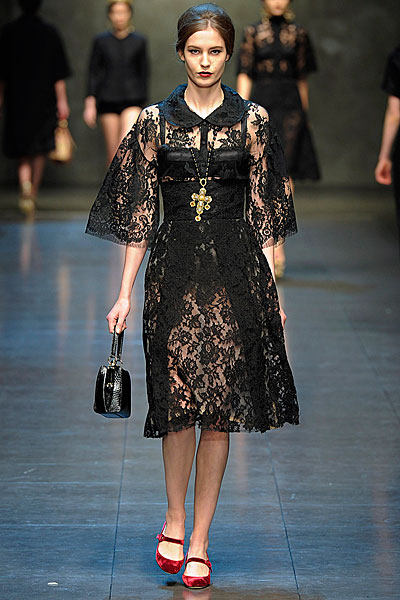 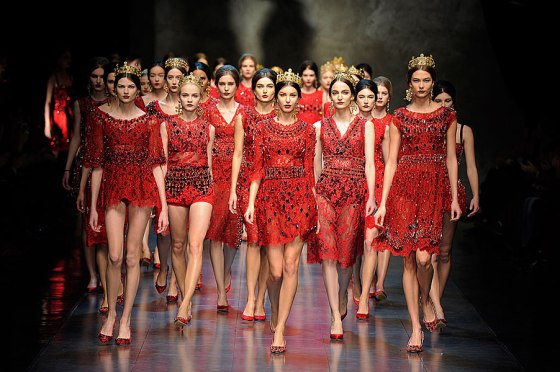